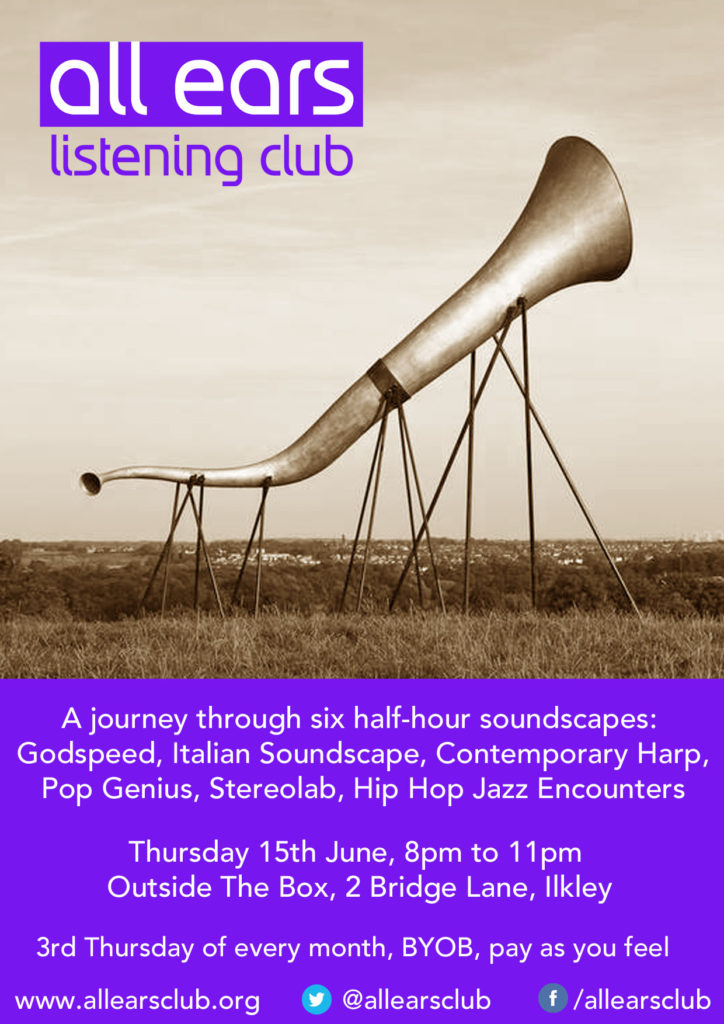 For those of you on Spotify all of these tracks apart from Rachel Sedman’s Italian Soundscape are in this playlist : All Ears 006 Playlist

Sounds recorded during the course of a week in the Dolomite region of Northern Italy amongst alpine mountains and stunning lakes. An experiment in listening as part of learning to be and understand a place.

Stereolab are an English-French band formed by Tim Gane and Lætitia Sadier in 1990 in London. They were a couple at the time but separated in 2004. Their sound is heavily influenced by 70’s Krautrock and 60’s Lounge. They have also been influenced by the Marxist and Situationist movements. They have released almost all their music on their own Duophonic Records label allowing them total control over their output. The band has been on indefinite hiatus since 2009.

Pop is often the most despised form of music but at its best reaches out beyond the niches and filter bubbles we live within, to connect with common experiences of loss, excitement, confusion, melancholy, hope, shame, lust, and love. Many people can hear the greatness in old pop like Bacharach and David and Barry White – but there’s some truly great pop music around today too.

A taster of the diversity of modern harp sounds from psychedelic jazz harp to electronic modern harp with some folk in-between.

Hip hop has always shown interest in jazz, whether sampling, or bringing in musicians. Recently, the links have grown stronger, and even more creatively fruitful.

Godspeed You! Black Emperor is a Canadian experimental music collective which originated in Montreal in 1994. Their expansive sound ranges from post-rock to drone to ambient. The group have long been associated with the anarchist movement. A number of side projects have grown out of the original group, some of which we will play tonight, including Thee Silver Mt. Zion Memorial Orchestra & Tra-La-La Band, Fly Pan Am, HṚṢṬA, Esmerine, and Set Fire to Flames.