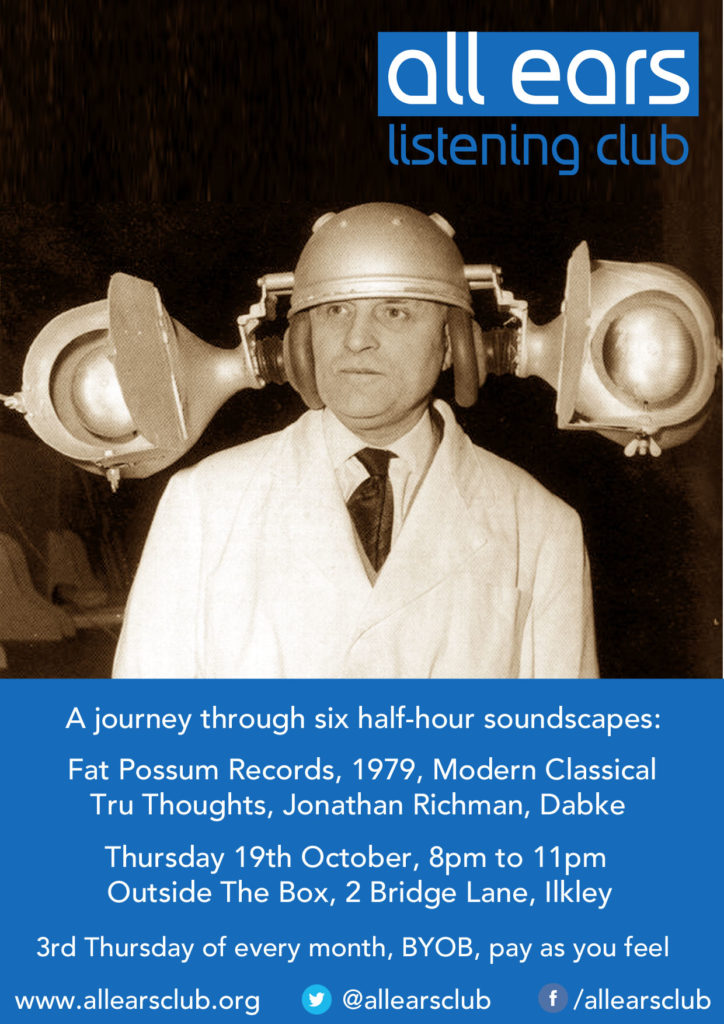 Here are the tracks we played:

For those of you on Spotify the playlist is here: All Ears 009 Playlist.

Another visit to the loose genre of the modern classical, a number of the tracks have been included at the suggestion of Marion Payne. We’re always happy to look at building a selection around your ideas and proposals.

Tru Thoughts is a Brighton based record label formed in 1999 by Robert Luis and Paul Jones. The musical styles of most of the artists on label fuse Soul, Funk, Jazz and R&B – sometimes with classic 60’s production values, sometimes with a more modern feel.

Until 1991 most of the artists that would record material for the newly formed Fat Possum record label were spending their days working the fields in the hill towns around the Oxford area of Mississippi. Their nights however were spent playing their own particular brand of the Blues, on porches, at parties and in juke joints across the region. Fat Possum then came along and captured their “Hill Country Blues” sound.

A highly personal selection of some of the most important releases from 1979, a pivotal year in the development of post-punk musical genres and the year I started at art school. I had just turned eighteen and was able to vote in my first general election, and we all know what happened next…

Jonathan Richman originally came to public attention in the early 1970s as the leader of Boston 4 piece, The Modern Lovers, before becoming a solo artist in 1979. With his child-like, wide eyed outlook on life and ability to beautiful capture the essence of multiple genres, Jonathan has amassed an army fans whilst shying away from the main stream.

Dabke is an Arab folk dance, often performed at weddings, native to the Middle Eastern region around Syria. Recently Dabke has gained more exposure in the west with Omar Souleyman who has worked with Bjork and Four Tet. Also included is a related Egyptian Electro Chaabi track from Islam Chipsey’s band Eek.