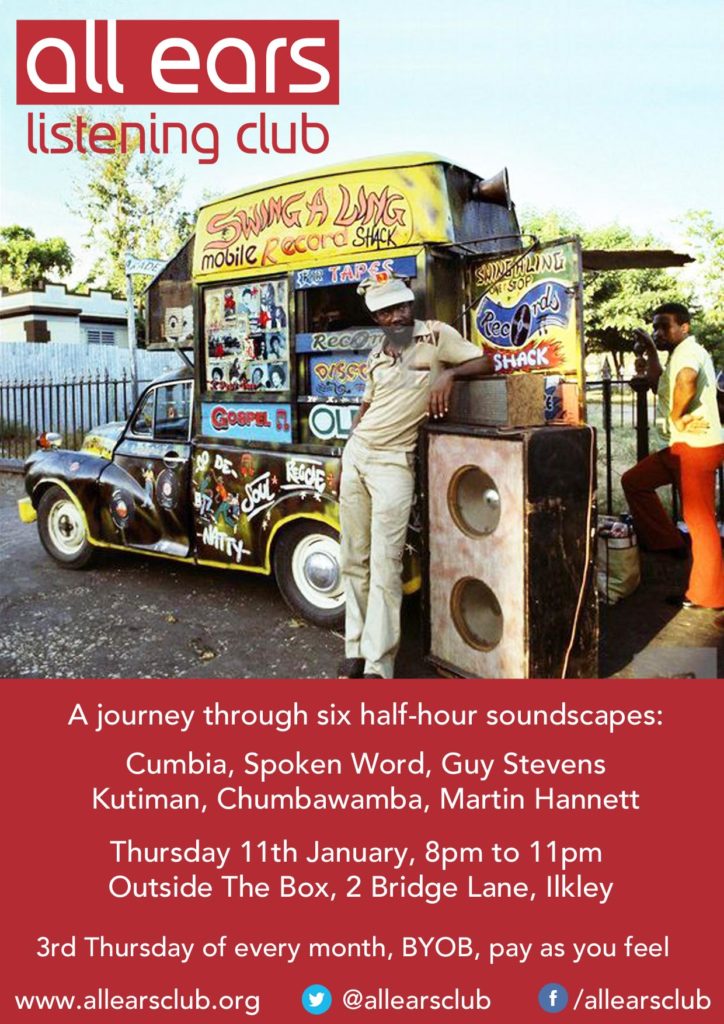 You can find most the tracks on this Spotify Playlist.

You can find all the Kutiman tracks on this YouTube Playlist.

Cumbia began as a courtship dance practiced among the African population on the Caribbean coasts of Colombia. By the 1940s Cumbia began spreading from the coast to other parts of Colombia and eventually became popular throughout South America.

From the words of the beat generation scene, to the word on the street (and much in between), the Spoken Word has always been flowing alongside the mainstream. Taunting, tempting, twisting genres. Double entendres. Jazz collaboration. Syncopation. Hip Hop (Don’t Stop!) Pickpockets, peddlers, even post-punk poets posing as popstars, emancipating themselves from the mundane… It’s 4:18 am, again.

Guy Stevens was the first house producer for Island records where he recorded acts such as: Free, Traffic, and Mott The Hoople. Later in his career he produced London Calling by the Clash. He was also a hugely influential Mod DJ at the Scene Club in London in the early 1960s.

Ophir Kutiel, known as Kutiman, is an Israeli composer, producer and animator. In 2009, he released Thru You, an online music video project, featuring a mixture of samples of YouTube videos, the video project received more than 10 million views in around two weeks. The musicians do not know they are being sampled until they are sent a link to the finished video.

There will come a time (perhaps it is already upon us), when people will remember only three things about the Chumbas – Their Greatest Hit (there’s only one!), attacking John Prescott at the Brits, and the foul-mouthed, whisky-swigging, high-kicking nun (now to be found mostly on the BBC) who smoked cigarettes and plied the front row of audiences with spirits. How times change. Lest we forget, revisit the best of 30 years of anti-Thatcher, anti-Establishment, anti-Fascist fun. From anarcho-punk, through post-rave experimental synth-pop, to its latter-day incarnation as a touring band of agit-pop folk troubadours, this was Chumbawamba.

Martin Hannett was a legendary Manchester producer and musician. His break was producing the Buzzcocks’ seminal Spiral Scratch EP. He went on to produce records by Jilted John, Chris Sievey, Magazine and many others. But it is his production of Factory bands Joy Division and New Order that he is most often associated with.