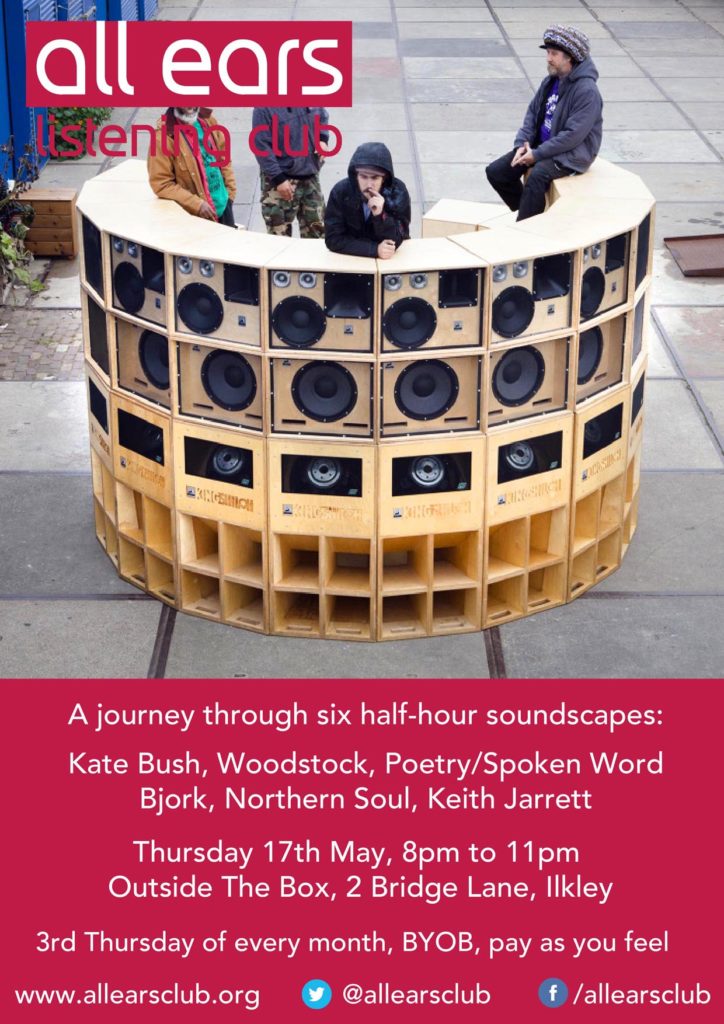 Two of Jacqueline Saville’s pieces are online: Summer of ’96 – recording or text, and The Lesson – text.

A recording of Andrea Hardaker’s The Conformist is here.

Kate Bush (b. 1958) is an English singer, songwriter, musician, dancer and producer. She first came into the public eye with her work in 1978, aged 19, with her hit single ‘Wuthering Heights’. Since then she has written and produced over 11 albums and developed a rich, experimental sound world in which to explore many themes of life and humanity. In 2014 after a 30 year absence from live performance, she held residency at the Hammersmith Apollo for the “Before the Dawn’ concert series.

In August 1969 more than 400,000 people attended The Woodstock Music and Art fair. The dairy farm in Bethal, for that weekend, became the third largest city in New York. 32 acts, mostly leading and emerging artists of the time, performed over the 4 day festival on one stage. This celebrated and peaceful gathering is widely regarded as one of the greatest happenings of all time and a pivotal moment in popular music history.

Björk Guðmundsdóttir (b. 1965) is an Icelandic singer, songwriter, musician, actress, record producer and DJ. Her career has spanned over 4 decades and influenced many subsequent musicians and songwriters. She has developed an eclectic musical style that draws on a range of influences and genres spanning electronic, pop, experimental, classical, trip hop, and the avant-garde. She is known for bringing in differing groups of people to collaborate with her and influence each album creating a diverse sonic palette.

Half an hour of stories and poems by Andrea Hardaker, David Hesmondhalgh and Jacqueline Saville.

Starting in the early 70’s, Northern Soul was a scene that thrived on the rare and the obscure. After Motown’s success, small start-ups across America attempted to replicate the sound, on a budget, often making one off records by artists who never recorded again. This provided a rich seam of rare vinyl waiting to be discovered by die hard soul lovers in Northern England.

This set is 8 tracks from Keith Jarrett’s 1985 ‘Spirits’ album. He made this album alone in his home studio playing all instruments: vocals, guitar, glockenspiel, soprano saxophone, recorder, piano, tabla, flutes and percussion. This is Jarrett’s most personal album of boundless expression, moods range from jubilation to a burrowing pensiveness, but always with an ear attuned to catharsis! I met him after a gig at the Royal Festival hall in the 90’s and asked him to sign ‘Spirits’ but he refused saying ‘I don’t think I can sign that’ and walked off, as he felt (like Stravinsky’s Rite Of Spring), he was merely a vessel the music passed through.