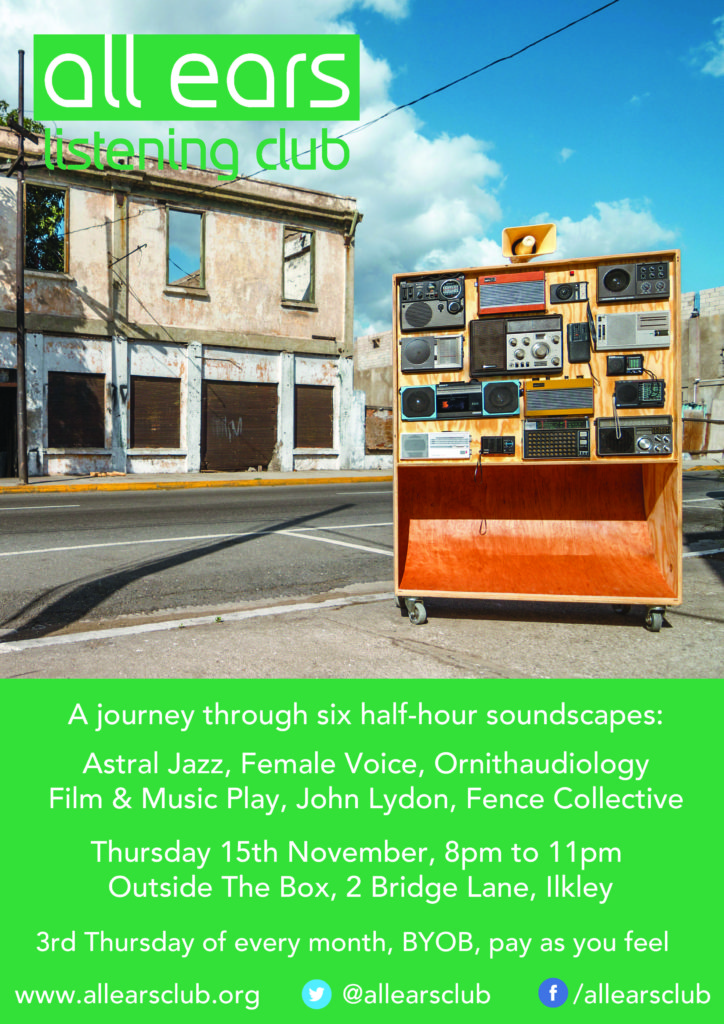 You can find Linda Green’s Female Voice set on this YouTube Playlist.

You can find Helen Steward’s Ornithaudiology set on this YouTube Playlist.

You can find Simon East’s Fence Collective set on this YouTube Playlist.

Astral/Cosmic/Spiritual Jazz emerged in the late sixties, as various musicians who had played with John Coltrane took his ideas and pushed them into new territory. This selection brings together the sounds of Pharoah Sanders, Don Cherry, Lonnie Liston Smith and Alice Coltrane.

I have chosen ‘Female Voice’ as it gives me an opportunity to play and share tracks by powerful singers whose music I really enjoy and listen to a lot. Ranging from the 1980s to the present day and from Joan Armatrading to The Unthanks, these sounds bring back fond memories from the last thirty years and create a great kitchen karaoke.

The sounds of birds are some of the most evocative in the natural world. Birdsong is often what we most notice and pay attention to, but in fact it represents only a small fraction of the world of bird sound – which encompasses contact calls; alarm calls; various forms of drumming (woodpeckers, snipe); wing-clapping (wood pigeons); booming (bitterns); whistling (wigeon and many other ducks); squealing (water rail); and more. I’ve tried to include a wide range of these auditory phenomena in this set. All the birds sampled can be heard in the British Isles (at the right time of year); and many can be found in Ilkley!

Music either leads or compliments my films, I’ve chosen tracks for mood, lyrical content, propaganda, to give you room to think or simply to make you smile.
Audio tracks include: Public Service Broadcasting, The Clash, Nightmares on Wax, Who da Funk, Jenny Scheinman, Julie Byrne and a live recording of a young local band called Altum.
Visuals are from recent film shoots, as a series of little loose vignettes. Art workshops, dancers and 15 and 16 year old musicians to give a few examples. I’ve been focusing on children and young adults caught in their joy and absorption of performing creative acts. This is mostly research footage, I hope it will go on to help me make a longer film – fingers crossed!

John Lydon’s singing has been described by Captain Sensible as ‘old man Steptoe moaning’ and by Jah Wobble as ‘a mixture of Withnail and Kenneth Williams’. But from the Sex Pistols to Public Image he has always been angry.

Fence Records was a British independent record label based in Anstruther and Cellardyke, in Fife. It was founded by musician Kenny Anderson (a.k.a King Creosote) and run by Johnny Lynch (a.k.a The Pictish Trail) until 2013. The Fence Collective is the name given to artists on or associated with the label.